Today and always, I AM pure joy, perfect health and abundance in every area of my life!  This enables me to be of most benefit to others. 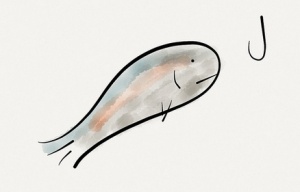 Acceptance is the releasing of the need to control.  I accept that I have little, if any, control over the initial thought or the instinctive reaction to that thought.  Meditation teaches me that the act of keeping all thoughts from coming is damn near impossible!  I don’t endeavour to keep the thoughts from coming.  My only goal is to slow down the mechanism to a point where I can see more clearly what is happening in my mind and body.  The discipline is to let the thoughts pass by and not attach anything to them.

It’s the same when I’m faced with a hurtful comment from someone or I see or hear something that causes me discomfort.  My initial reaction feels like a tightening in the stomach. In Tibetan this is called shenpa, a hook that triggers our habitual tendency to shut down, close off.  I cannot prevent that initial tightening, as it seems to happen automatically.  What I can control is what comes next.

I notice the lurch or hooked feeling, I then use it as a path to awareness of what is actually happening.  The truth being that my ego has been hit with sniper fire.  I can choose to let it pass through, causing no lasting damage.  Or I can hold it inside me, letting it become inflamed and infected, causing all kinds of trauma.

There was a time when I would always choose to hold onto it.  I would place all my attention on it until it became debilitating, a form of self-punishment I believed I so richly deserved for all my failures.  Today I know better and I choose to let it go.  It really is the easier, softer way.

I believe a lot of suffering comes from the “What-If” complex and the subsequent feelings we attach to those thoughts of…. “What if I can’t afford to pay my mortgage or put food on the table?  What if my partner leaves me?  What if I’m not good enough?  What if I don’t get my needs met?  What if I fail at something I really want to do?  What if I end up looking like a fool in front of everyone?  What if I make all this effort and still don’t get what I want?  What if I go blind?  What if my children get hurt or die?  What if I lose everything?”

What if I stopped torturing myself with “what ifs”??

Allow your negative thoughts to pass by, like clouds in the sky, noticing them, but not attaching any judgment or feeling to them.  By allowing them to pass on by, they leave no imprint whatsoever and, therefore, cause no suffering.

Yesterday, I went for a Thai massage at the recommendation of my husband.  This was no fluffy spa massage though.  Not to say there is anything wrong with fluffy massages aimed at relaxation.  They have their place and I love them.  However, this massage was more therapeutic in nature.  This gorgeous, itty-bitty Thai woman with enough strength in her hands to rival a lumberjack found spots of immense blockages (read: pain) that took my breath away.  I had to use all my powers of concentration to breathe through it as she worked away at what sounded like walnuts being crushed.  I used my meditative skills to imagine this incredible energy coursing through all the blockages in my body, and enveloping us both.  During this meditation, I was suddenly hit with a revelation; but first, a little background….

Earlier in the year, I began to have what I called vision attacks, along with high blood pressure spikes.  I immediately dove straight into fear at all of the horrible possibilities these symptoms might represent.  When I looked online, all the sites came up with stroke, heart attack and brain tumour, with the advice to seek medical attention IMMEDIATELY!  Even though I know better, I got quite swept up in the fear of it all.  As you might imagine, all my symptoms got dramatically worse and more frequent, eventually landing me in hospital for numerous tests over the course of a few days.  The tests showed nothing wrong, whatsoever, with my heart and brain and I was discharged.  My symptoms continued for several months and more were added to the mix.  I continued to focus on these “events” and requested more tests, desperate to find the problem.  Unfortunately, in my quest to find the problem, I was creating more of the problem.  Whenever I place my attention on something, whether positive or negative, the energy around that grows exponentially, which is exactly what was happening here.

I’ve always believed that all health issues are created by an imbalance in the mind/body, and I was wracking my brain to figure out where my imbalance was.  I was seeing an acupuncturist, well known for his incredible diagnostic abilities, meditating regularly, adding and eliminating things from my diet and talking incessantly about it in the hopes someone would have some ideas I hadn’t thought of.  I was also doing grounding energy work and exercising regularly, but was still having all these “negative” and uncomfortable symptoms.  At the same time, I was also experiencing an unprecedented and amazing flow of creative energy with my writing.

I recall now that all of this started after I had begun engaging in the practice of opening my heart to the universal energy flow, while also fully accepting my gifts as a mystic.  When I acknowledged that I have the ability to see people, clear through to their true essence, to identify what lies beneath the surface and what’s behind their behaviours, the flow of energy coursing through me became quite intense.  Then it hit me during my massage.  What I deemed “negative” symptoms of a possible health problem was simply my energy shifting toward a higher vibration, but out of fear and old habits, I put up blocks.  It is these blocks which are causing all of the uncomfortable symptoms. I’m certain of it.  It’s kind of ironic, actually, that when I acknowledge my mystical ability to “see,” I suddenly lose clear sight.  I understand now that the early initial events were just my energy shifting toward a higher plane. However, in my fear and ignorance, I interrupted the current, which created and then exacerbated the symptoms until they were debilitating.  So it stands to reason that if I created all the blocks, I have the power to remove them. I’ve also noticed lately that when I’m writing and the creative flow is strongest, my blood pressure rises and my breathing changes.  To think…all these months of worry and it turns out to actually be the extraordinary gift of creative manifestation.  If I stop resisting, embrace my gifts, and remove the blocks, my energy and general well-being will return to its perfect state.

So, as of this moment, I will no longer place my attention toward fear.  I will focus only on embracing and liberating the divine energy of my source, allowing it to flow through me, completely unrestricted and free.  This is the path to absolute balance and clear vision.